Complete Retop & Purfling With Matching Headstock
Too bad it still has a rosewood board, The Ebony would have been better

This Guitar Came In With A Delaminated & Split Top

The Original Top Was Flame Maple, The Owner Wanted

It Replaced With A Solid Spruce Top.

These Photos show a Hollowbody PRS

This is a new top for a PRS Hollowbody
Made in our custom shop
This one is better because you can use a tun-a-matic bridge
You are no longer stuck with the inferior PRS wraparound bridge !!!

This is a tremendously expensive process !!!!
That's why we have only converted  10 of these guitars in the past 10 years

The Original PRS guitar after we cut off the top !!!

Above you can see the new top being glued to the original body.

We used a very plain piece of wood to do this guitar
The customer wanted an opaque solid color !!

Retopped In Our Custom Shop

Example of a retopped guitar & headstock

Complete renovation
New Quilt  Top, New All Rosewood Neck
Ed Roman's Custom Shop !!!!
The only thing original on this guitar is the back of the body !!!!!!
Too bad he kept the stock PRS tremolo,
If he had used a Tun-a-Matic bridge, this guitar would have stood up to a Quicksilver

It is extremely rare that we will retop a 22 fret model
You can't polish a turd !!!!

This one is not a retop, It's a brand new body !!!!
Custom Made For A Customer

This is a PRS that thinks it's a Quicksilver
(See the bridge we installed)
Retopped Body, with Bird Inlays done at Ed Roman's
PRS does not offer nice tops or bird inlays on their bolt on models !!!!!

When we retop a PRS then we can use a Tone/Pros Bridge
This is highly advisable!!
Some people do the entire retop just so the can change the inferior stock PRS bridge

Here's A Pretty Stock Straightforward Retop
The customer had dropped this guitar and it put a huge ding on the face !!

Bonni Pink used to be a really sought after color
People would pay several thousand extra for just the color !!
We retopped at least 12 PRS guitars & refinished them in Pink
Naturally we went inside and changed the color markings so that it would look Original !!

Retopped, Refinished  & Floyd Rose Tremolo Added
Not recommended but if  You want it done,  We will do it !!!!

Retopped Headstock
in the late 90's we did about 50 matching headstocks on PRS
When they came out with the newer shiny decal there was a problem with the logo falling off
We must have fixed 100 of those !!!

If You Can't Afford A PRS  Check This Out

More Problems
Where was I going to get the decal to restore to the headstock.
PRS uses a completely different decal today.
This guitar had dot inlays and no birds.
I have now located decals for restoration purposes only 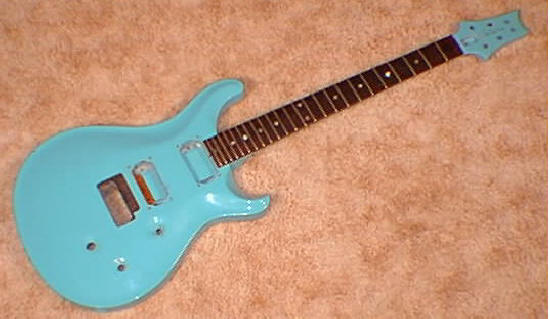 I decided that I wanted the top to look as good as a JET or a Quicksilver
I wanted it to sound fabulous.

So you own a vintage guitar

A little anecdote for your reading pleasure

First the serpent is designed with colored pencils

After the customer approves the drawing
it becomes a reality
The serpent inlays are all done one by one by hand
no two are exactly alike.