Watch out for corporate guitar brands "custom shop" models. They are only slightly better than their low end imported counterparts. Yet the pricing can sometimes be more than triple. When I worked for Gibson in the early 90's the rule of thumb on pricing was overprice the guitar so the customer will assume it's better than the competition. Many companies are catching on to that scam today.

Collectors Make Sure You Read This,  It's Important!
Basic Autograph Intelligence !!!
We get asked for this stuff all the time!!!!
We will warn you before you buy it !!!

I took these pictures in a popular memorabilia shop In Los Angeles.

People actually buy this type of crap !!!!!
If you do you have more money than brains  !!!!!
The guitar has been autographed so maybe the guitar is worth $400.00
The frame is worth $200.00 but who wants to frame a $99.00 Guitar.
You can find this crap at Hollywood Blvd rip-off tourist traps etc etc.

Currently I have a $1,000.00 Fender Guitar that has been signed by Eric Clapton
The price is about half what the Squire above is selling for.

The guitar below is a $3,000.00 Gibson 61 reissue exactly like Clapton's Original
There are over 60 hours of hand paint work in 88 colors invested in this guitar
The frame is a far better frame than the one above
This is selling for $5,900.00
This guitar is a real conversation piece,
it is as high quality as Gibson makes and it screams Eric Clapton
The original 1968 copy of Disraeli Gears is signed by Clapton Bruce & Baker
Still an expensive instrument but not a bad investment !!!!!

We supply these to numerous Hard Rock Casinos Around The World
We Do Player Models, Exhibition Models & We Will Even Paint Yours If You Like !!! 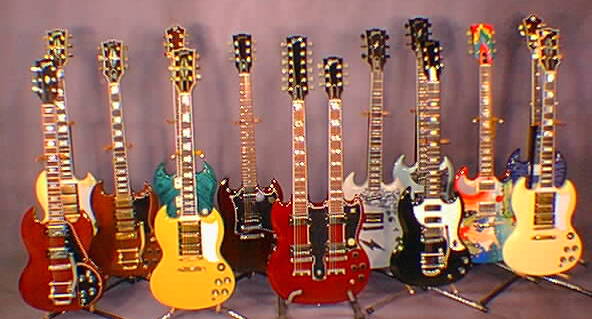 Gibson has preloaded a huge cache to it's price.

It just so happens,  I make a buttload of money Repairing Gibson Guitars!