Ned Steinberger, designer of the WAV Series, comments: "This is the part I love, where we can put a fine instrument in a players’ hands at a price that makes them smile.

The initial offering of this series is the full scale, WAV 4 electric double bass featuring NS Design’s proprietary Polartm piezo pickup system. The WAV 4 Bass is available in a choice of colorful finishes and includes a foldable tripod stand with a padded gig bag.

Ned Steinberger & Ed Roman go way back to the early 80's. Ed worked for Ned at the Steinberger factory in Newburgh NY back in 1990-1991 before Gibson shut the factory down and went into the import business.

Ed says, he has always been in business for himself his whole life. "Working for & with Ned was a real experience, Ned Steinberger is a true genius. I personally am sorry he sold the rights to the original Steinberger guitars to Gibson because many people buy them for the name only.

BTW Brian Moore hasn't been with Brian Moore Guitars since the first year of production!!  They were still Brian Moore "Custom" Guitars.  (Operative Word Custom) when Brian was actually still there. 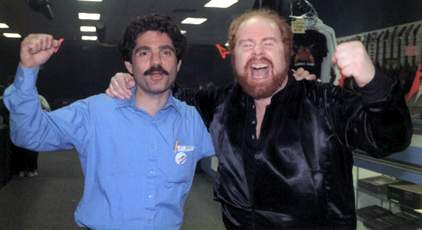 We were both a lot younger in this picture

Where – and how – did this all begin?  Ned Steinberger was born in 1948, the son of an artist mother and a flute-playing Nobel Prize-winning physicist father. Ned set up his own wood shop at the age of 13, and after majoring in sculpture at Maryland Institute College of Art, went on to design furniture and cabinetry. Some of Ned’s early furniture designs are still being manufactured today.

In the mid-1970s, Ned met some like-minded individuals from the Brooklyn Woodworking Co-op.  One of these was Stuart Spector, the New York luthier, who got Ned interested in the design of stringed instruments.  Ned’s first instrument to meet major public acceptance was the Spector NS bass guitar, designed in 1976.  With its distinctive curved body, both front and back, the Spector NS series has become a recognized classic and continues to enjoy wide popularity to this day.

The concept for the 'headless bass' soon followed.  Ned wanted to develop and instrument that was not constrained by conventional design precepts, using new materials for the tonal properties they imparted.  More importantly, he realized that the head was not essential, the tuners providing better balance when placed on the body of the instrument.  This led to the establishment of the Steinberger Sound Corp. which successfully developed and marketed headless graphite instruments to world wide acclaim.  The Steinberger Bass received numerous awards, including the coveted “Design of the Decade” award from the Industrial Designer Society Of America.

Ned didn’t stop with the bass.  He soon after introduced the Steinberger Guitar and the TransTrem ™ - a unique transposing vibrato unit that allows strings to remain in tune with each other rather than detune randomly.  Among those who recognized the utility of the TransTrem was Edward Van Halen, who frequently played a TransTrem-equipped Steinberger guitar.  Ned’s company, Steinberger Sound, was eventually sold to Gibson Musical Instruments in 1986.  This allowed Ned to return to instrument design and innovation rather than having to run a guitar company, yet he stayed involved and remains as a design consultant for Gibson and Steinberger.

Today at NS Design, Ned’s passion and dedication to innovation continue undeterred.  With new patents on the double bass and violin, the full NS family of concert string instruments advances the state of the art.  The remarkable Polar ™ pickup system provides unparalleled response, control, and richness of tone for both bow and pizzicato technique.  Excellent balance and light weight make the instruments a joy to play.  Full control of extensive on-board electronics and interchangeable support structures for the bass and cello provide unprecedented versatility to meet a wide variety of performance requirements.  The same qualities, beautiful tone and flawless playability, that make these instruments the choice of the most accomplished musicians, also make it possible for the student player to achieve a higher level of performance.

In addition to NS instruments, Ned continues to design products for other companies.  Collaboration with David Gage of New York City has led to the development of The Realist ™ transducer for acoustic string instruments.  Other designs include electronic tuners, tuning hardware, structural systems and accessories for companies such as D’Addario and Martin. The original NS Design website, showing some of these design concepts, can still be viewed on the NS website archive.

These only resemble the original models.